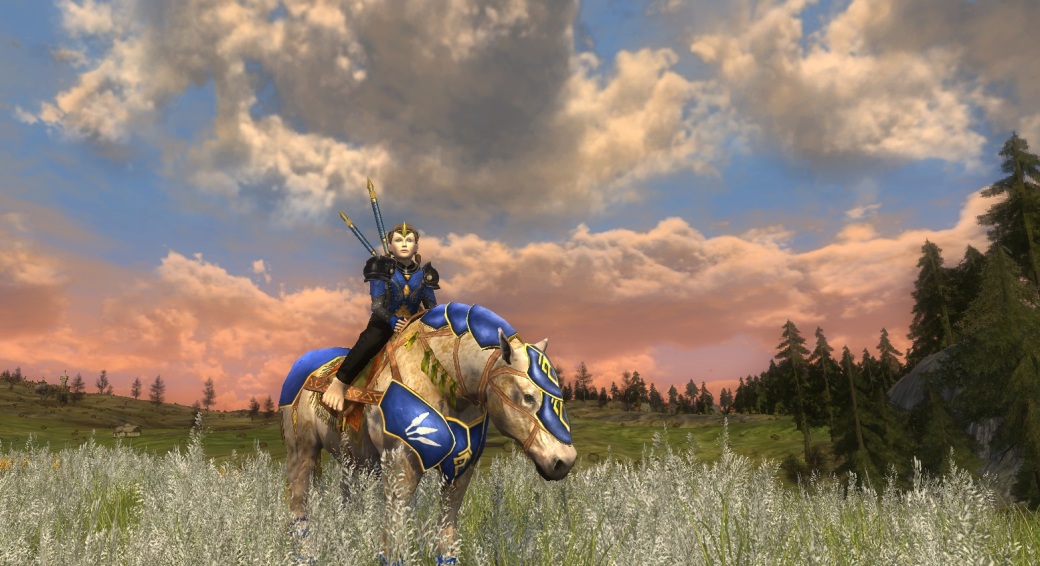 What?!?  None of the above title makes sense you may say, how can a hobbit be a warrior of the Eorlingas?  But wait, what about the famous (or infamous) Meriadoc Brandybuck, the one who was Esquire to King Theoden?  Ah-ha!  Now things make a bit more sense.  The Eorlingas knew that a short stature sometimes hosted a brave warrior heart.  And that is the case here with Delphinia.  Trained since her youth in the ways of the warden by the elves, she is a fierce warrior in her own right.  Add in her war steed Calyx and she is well-nigh unstoppable, a true Rider of the Eorlingas!

Delphinia and Calyx often ride the wide open plains of The Mark, and one of her preferred times is as the sun is setting.  The colors of the fading sun dye the skies with many shades of red, orange, and yellow – slowly fading to darker purples and blues as the sun fades completely for the night.  Clear skies or rain however, nothing will prevent this small warrior from protecting the crofters from evil. 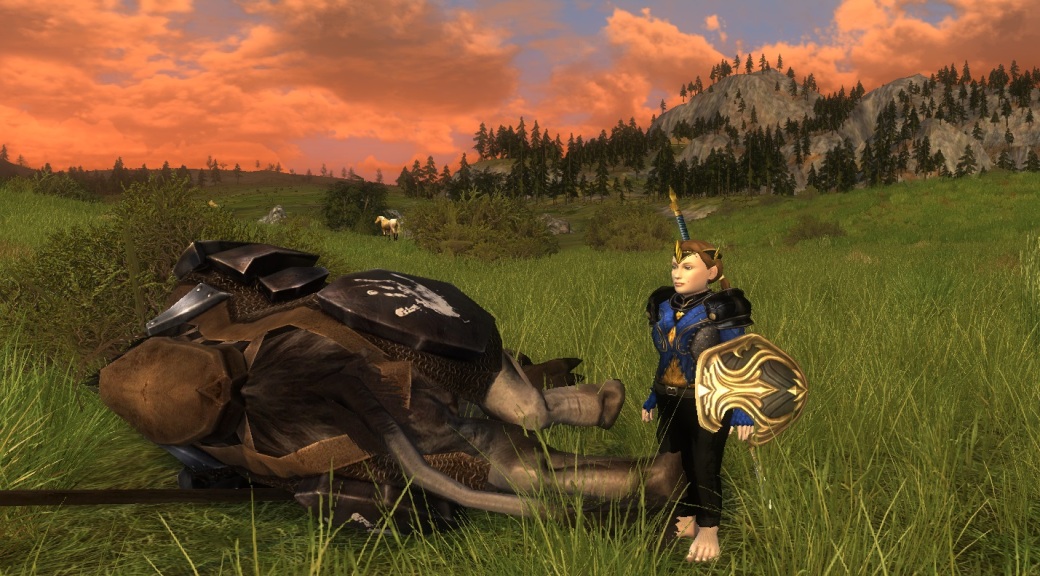 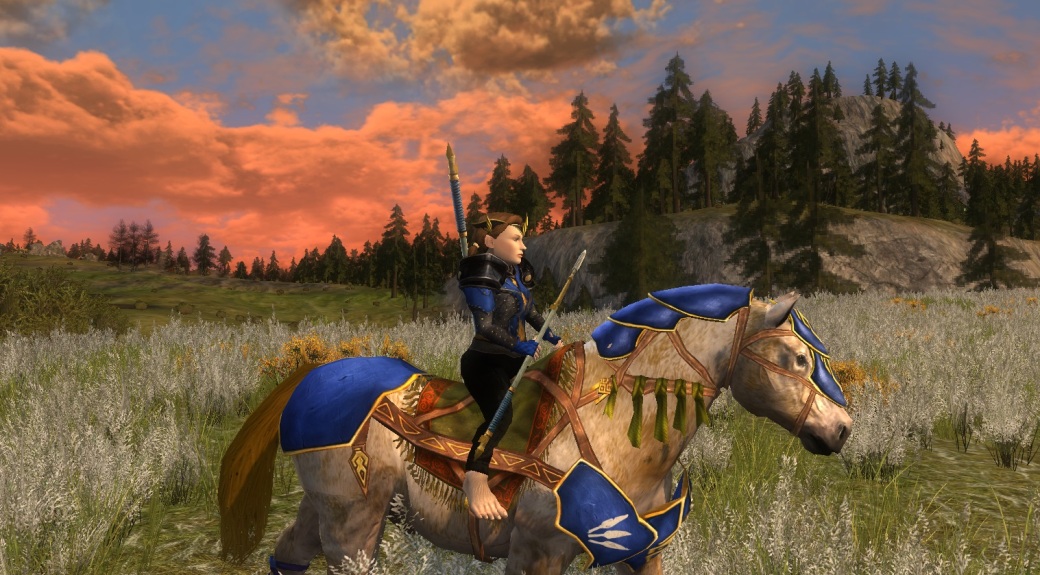 Delphinia is Wearing:
Head – Ceremonial Hat of the Written Word in Black
Shoulders – Ornate Pauldrons of the Dunland Swordsman in Black
Chest – Malak-Zudur in Evendim Blue
Hands – Gloves of Resolve in Evendim Blue
Pants – Leggings of the Learned Stag in Black
Spear – Warden’s Piercer
Javelin – Strike Against the Darkness
Shield – Wildermore Combat Shield of the Soldier

This outfit has been around for a long time!  This is what Delphinia was wearing in her introduction post, and the only real change was the color of Calyx’s steed armor (I had it in Ered Luin blue at that time, since then I did buy the color pack that included Evendim Blue).   I was also able to use weapon and shield skins that fit the outfit, but neither of those were present in the original screenies.  Enjoy!

The Shire is full of lovely places to see and visit, being a vibrant region full of folks who love their homes and the land.  When not out adventuring Delphinia enjoys walking though the gardens and wild places.  Today’s stroll takes place in the memorial gardens of Michel Delving as she is in town visiting friends. 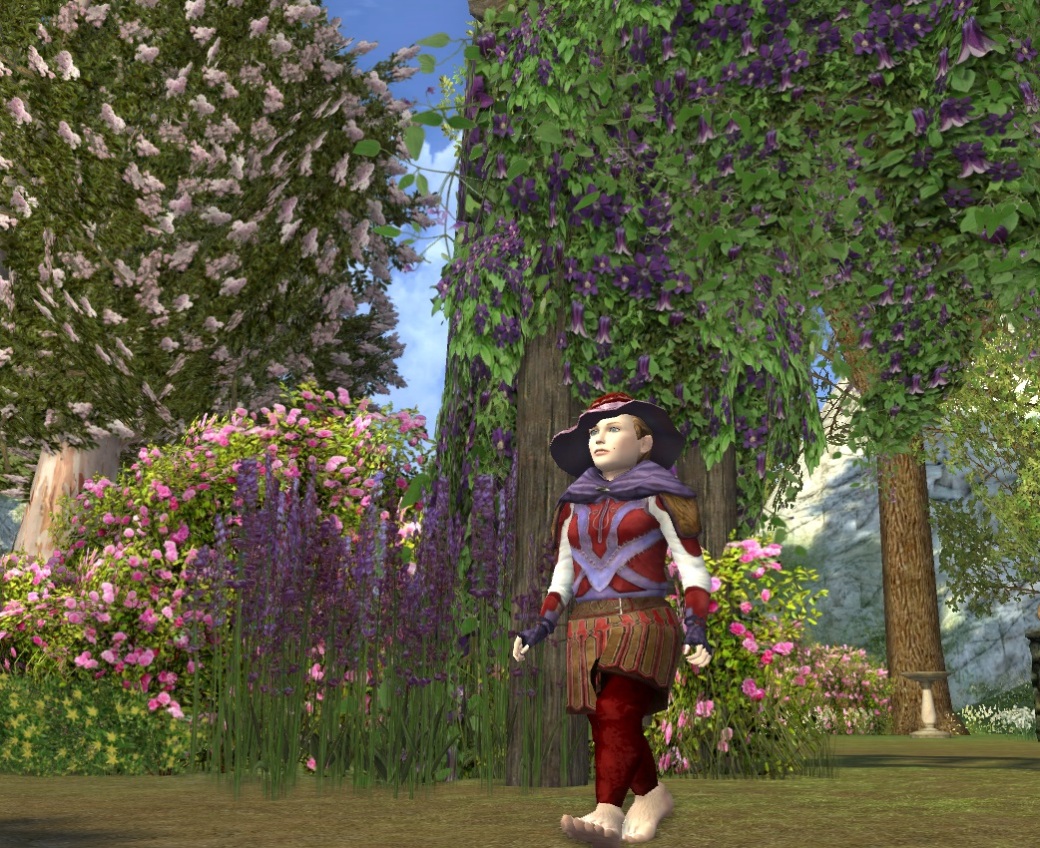 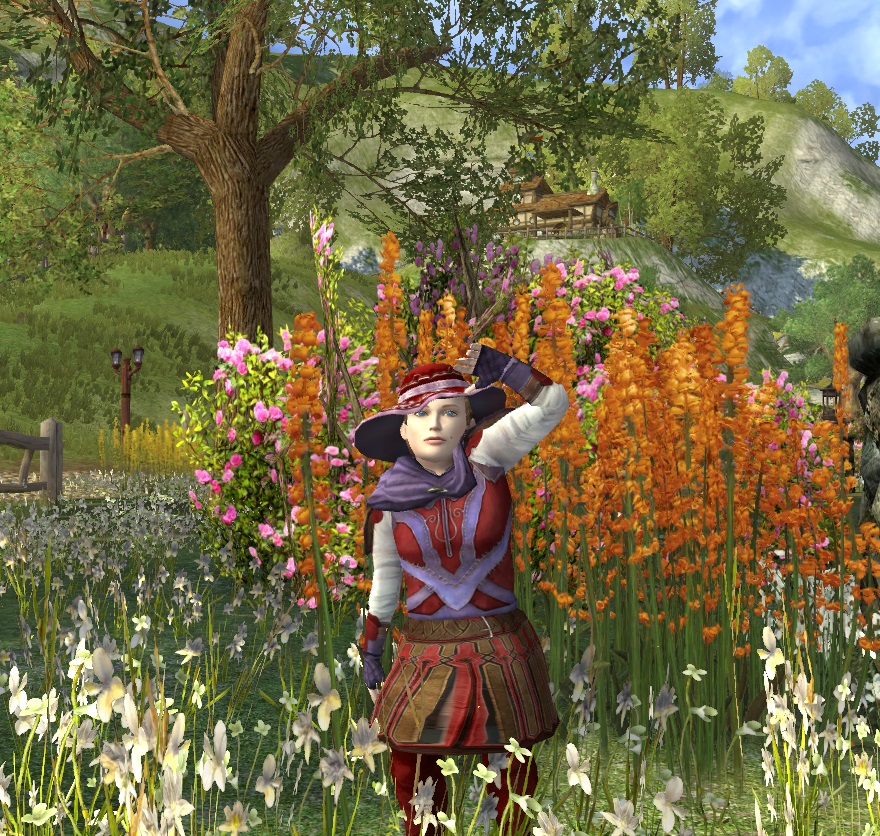 Chest: Cuirass of Moonlight in Crimson

Legs: Threadbare Leggings of the Dunland Healer in Crimson

Hands: Gloves of Resolve in Violet

Delphinia hopes you enjoyed joining her on her walk through the gardens!

So, four years ago today I made my first post on this blog.  And my how the time as flown!  I have grown and learned – looking back at some of my earlier screenshots makes me cringe a bit, but they were the best I knew how to do at the time.  I like to think I’ve learned and grown over the years 😉

And last but not least, this time of year is also important to many religions, especially here in the northern hemisphere as winter has finally released us and the season of spring is really starting to get going.  So I decided just to do a couple themed spring/easter screenies to celebrate my own blogiversary, the LotRO anniversary,  and the season – thank you all for being along for the ride 🙂

Carrying the Basket of Colourful Eggs

Reznora is quite the intrepid hobbit adventuress, and one of her newest discoveries is a love of treasure hunting!   She was recently taught by the dwarves of the Blue Mountain how to pan for gold, so off she went to find a possible stream to pan.  She decide on the shallow waterways in Western Gondor, near the town of Calembel.  To be honest probably not the best choice, as the Gondorian folk have been living in the area for a long time, but its where she wanted to go!  (I would have thought the river flowing down through Enedwaith from Draigoch’s lair would be a better choice, but hobbits do what hobbits want to do…).  She did have some success, but I secretly believe some Gondorian nobleman’s purse had torn and lost some coins in the shallow river crossing upstream.

This outfit was inspired by my desire to have a sturdy travelers outfit for this hobbit adventuress.  With the cured leather pants and gloves, rolled up shirtsleeves, and snazzy padded red vest – Reznora certainly fits the bill of an adventurous hobbit lass.  Add in the backpack full of important supplies and a steed laden with the remainer of the supples (and her own snazzy red gear) – this team is ready to head off into the wilderness for adventure! 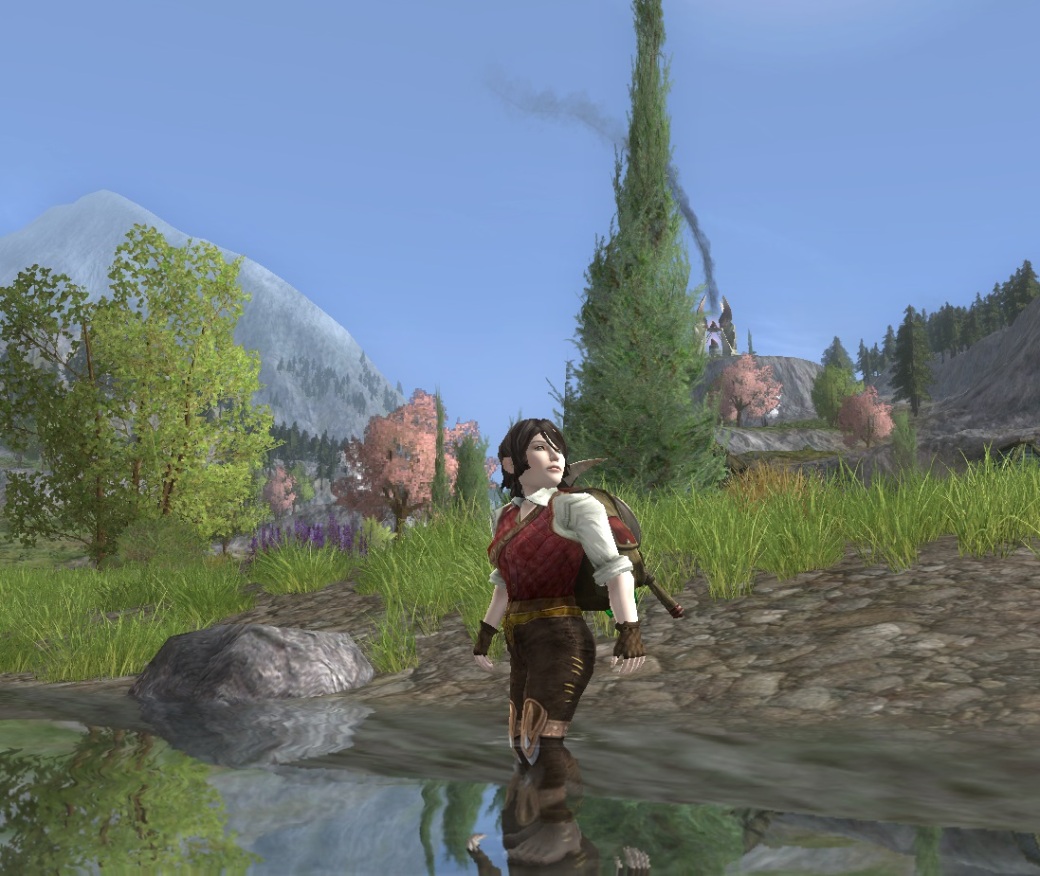 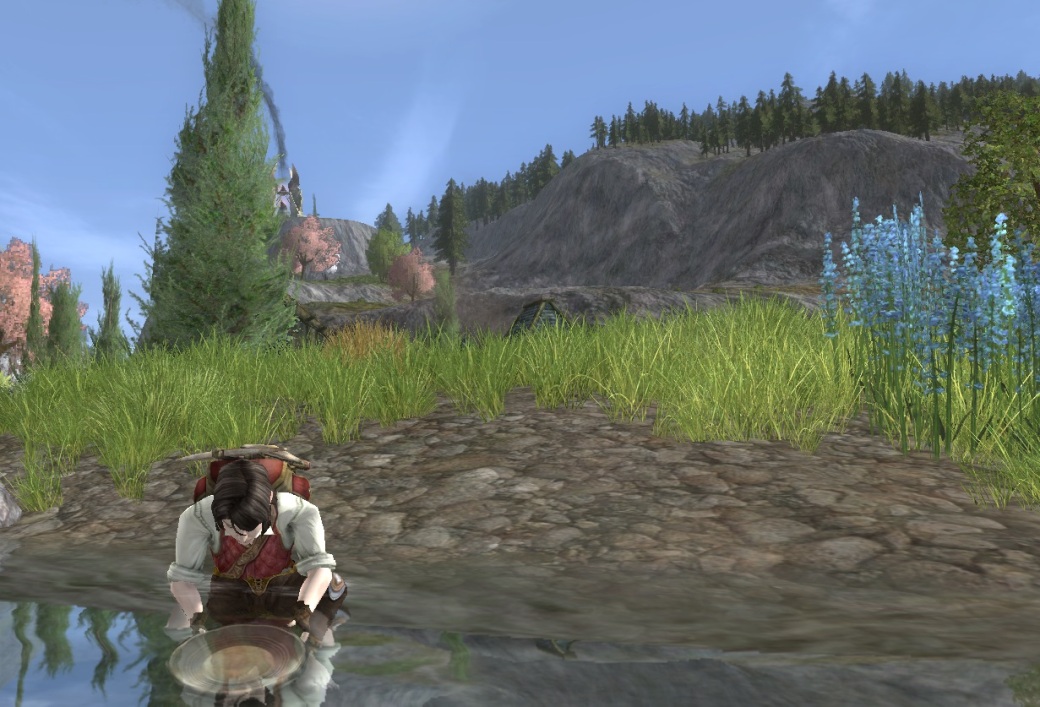 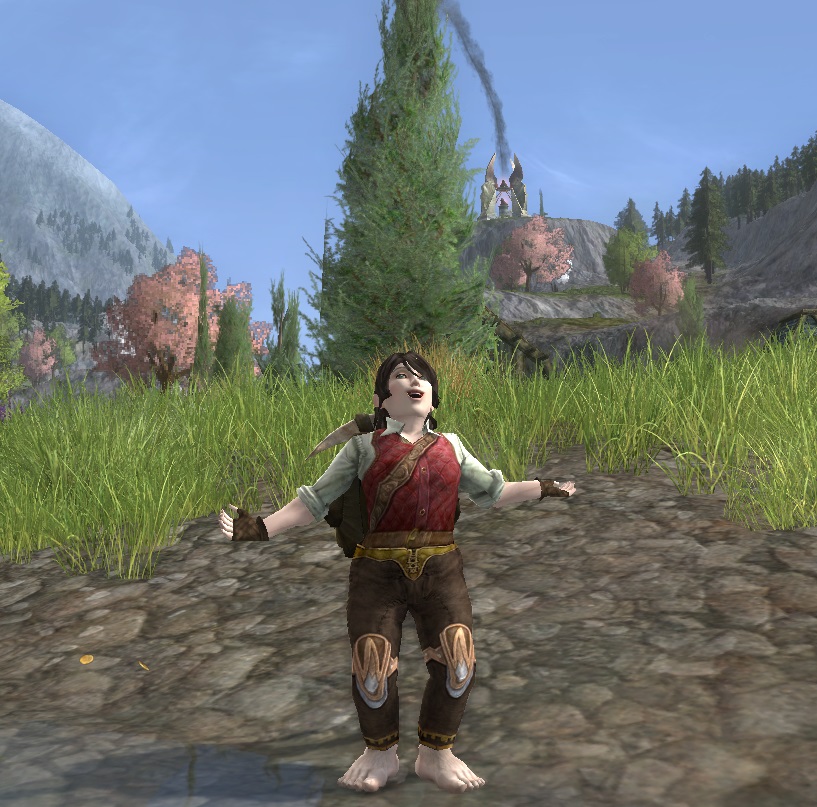 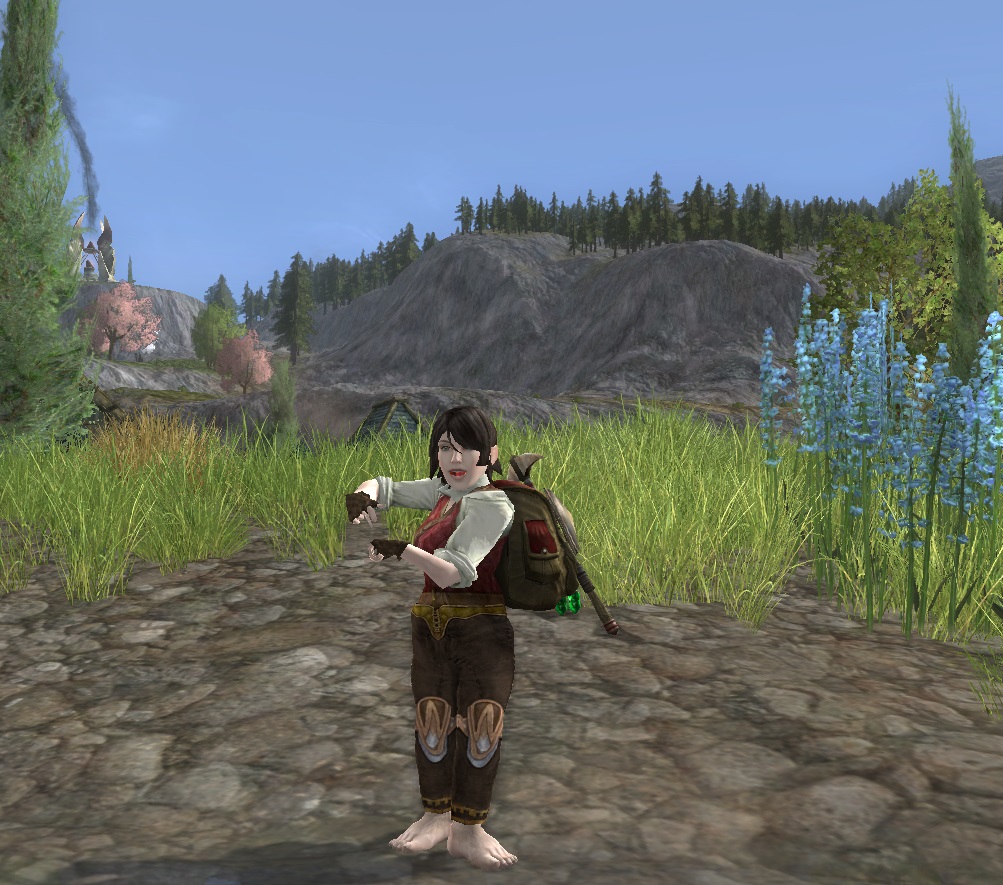 Gloves – Gloves of Resolve in Umber

Back- Treasure Hunter’s Pack in Crimson

Light Halter of the Sutcrofts in Red

Light Leggings of the Entwash in Red

I came up with this one after last year’s Harvestmath Festival, so I decided to wait until this year to release it.  All shots were taken at one of my homes, the one with a fall/harvest/beer/rohan theme – they all seemed to go with each other!  Delphinia kindly volunteered to be my model 🙂 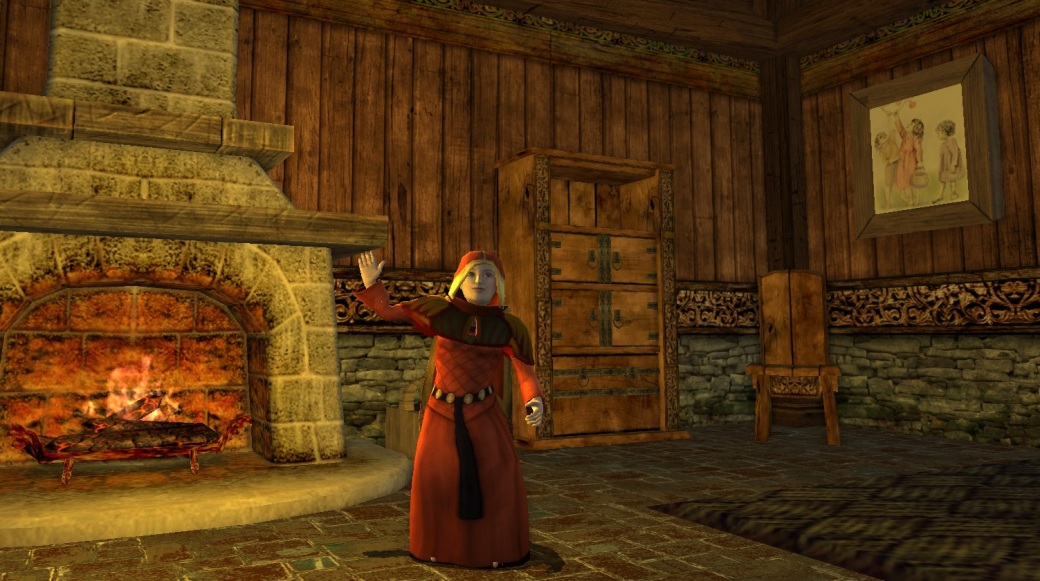 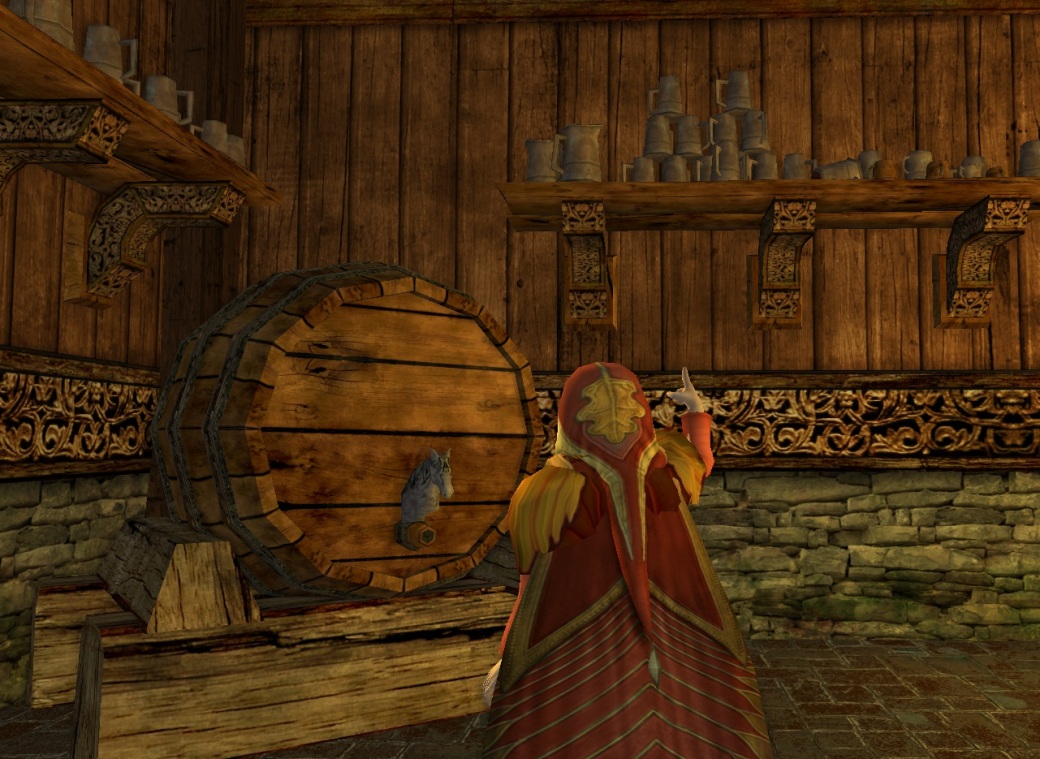 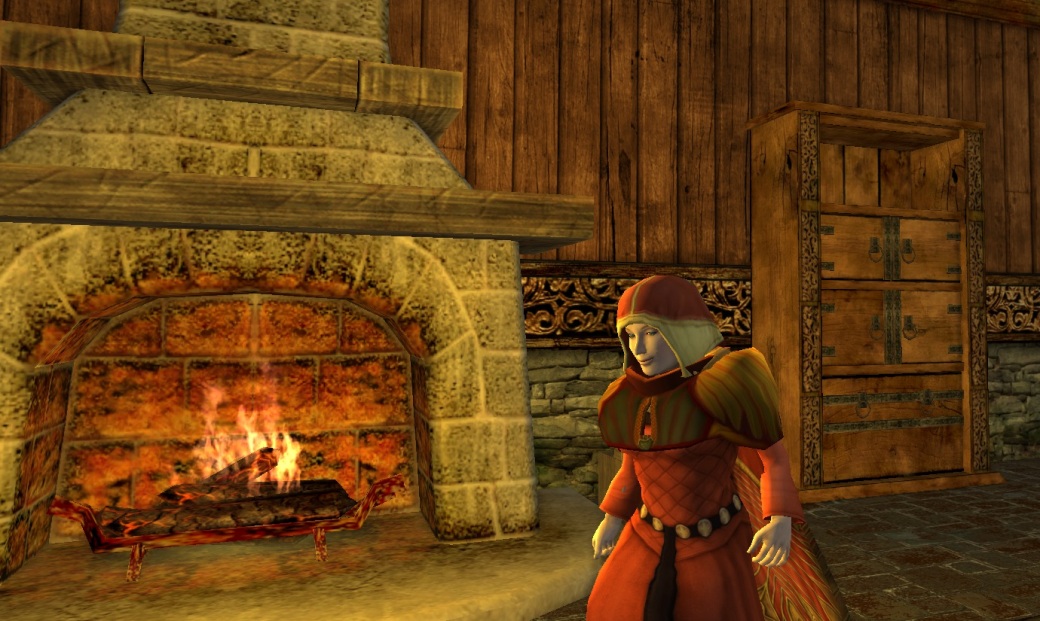 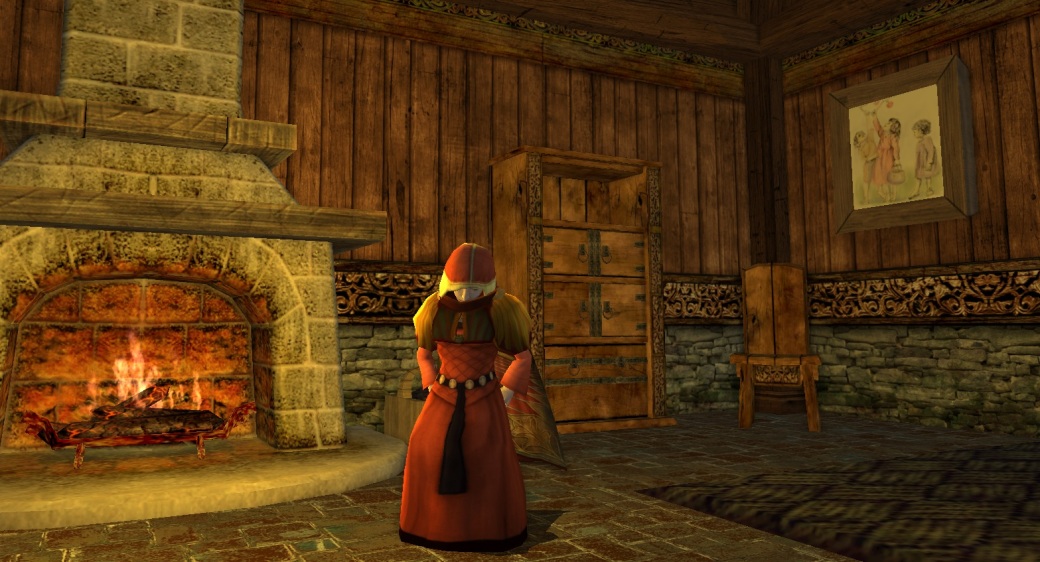 Chest – Dress of the Anorien Autumn in Sunset Orange

Shoulders – Mantle of the Gloaming Autumn

Back – Cloak of the Golden Oak in Sunset Orange

The home is located on Evernight server, in the Breelands Neighborhood, Naping, 1 Fountain Street.  All are welcome to visit, and many of the other homes in that neighborhood also belong to me and are open to visits (especially in that Fountain Street / Garden Street corner)!  For this year’s Harvestmath Festival I have all eight of the treat mats out to for folks 🙂

Delphinia of the Fallohide Hobbits

Delphinia is a young hobbit warden. Born in the northern parts of Ered Luin, she lived there with her parents and younger sister Reznora until a tragic accident took the lives of both her parents. She accompanied the young Reznora in her visits to the elven enclave near their home. While her sister learned music, she took lessons in spear and javelin warfare from the elven warriors. After the accident the sisters moved back to the Shire, Tuckborough to be precise, to be near their Took relatives. Delphinia kept up her martial training, and is the reason for some of the mysterious elven sightings in the Shire as her elven mentors would periodically travel to assess her progress .

Delphinia is quieter than her sister, but just as cheerful. She learned woodworking techniques from the elves also, and she continues to hone her skills. After Reznora left home to join the battle against the growing darkness, it was not long before Delphinia properly closed up their home and set out on a journey herself. Her skills as an elven-trained warden would be useful in this war!

Her steed is named Calyx, and she safely takes Delphinia to whatever battle she is needed in the most. 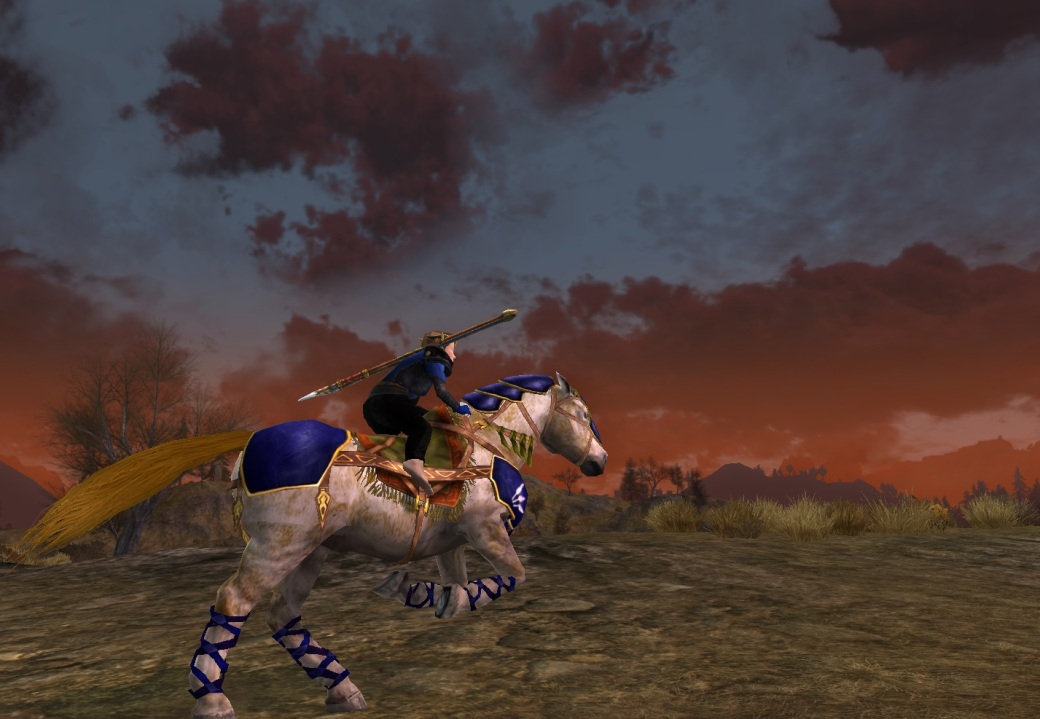 The hobbitess Reznora is getting rather tired of winter. This year winter has been particularly cold and snowy, especially in the past few months. It seems that spring will never arrive… The cold temperatures and that thought make her shiver.

So, being an intrepid young hobbit, Reznora decides to take matters into her own hands and go looking for spring. It really is time for it to begin! She sets out down the road, searching. This area seems to be getting there, but still not quite the full-blown spring she is looking for. It is still chilly here also! She shakes her head in exasperation and looks up for perhaps some inspiration on where to search next… 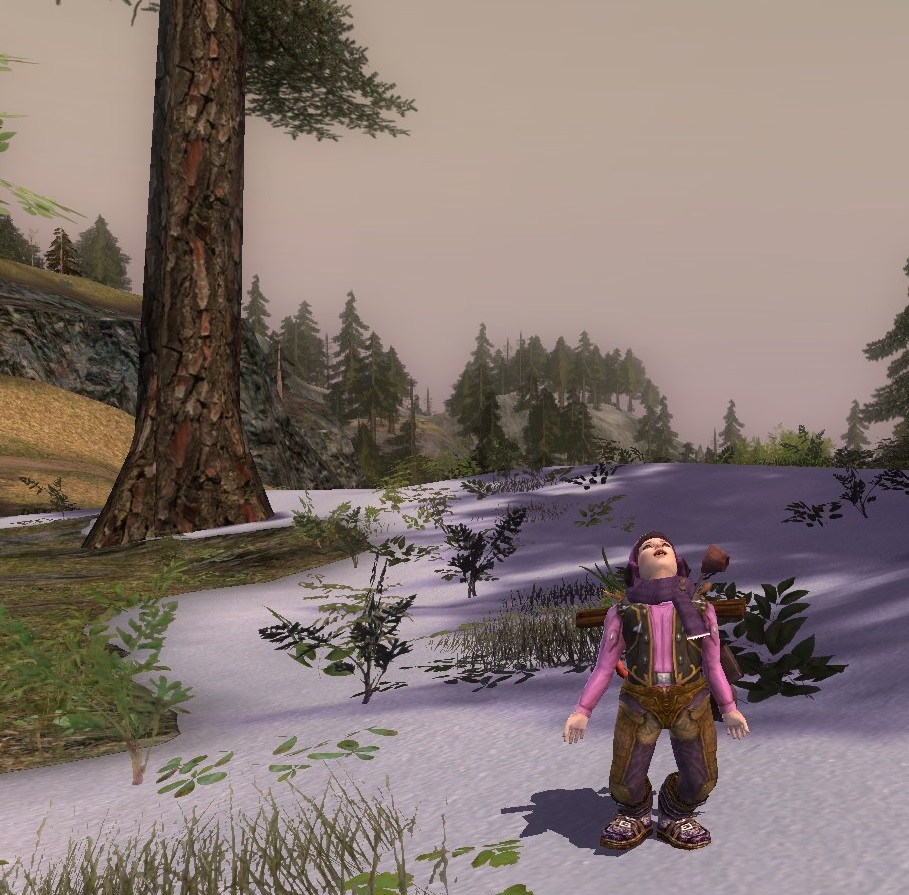 The journey continues on, but then it happens! She finds SPRING!!!!! It really does exist!!!! Time to throw off the warm wintery clothes and jump for joy among the spring flowers 🙂

In addition, there are the lovely flowering trees scattered all over the place. You know just one good strong breeze and the world will be filled with, and covered with, beautiful pink blossoms. Reznora is at this journeys end!

Her outfit is:
(in springtime)
Chest – Jacket of the Erebor Watcher in Rose
Pants – Lanfereth’s Doom in Violet
Back – Cooks Trappings in Violet
Hat – Slagvi’s Hat in Violet

I found this to be the perfect post for the first day of spring!  I hope you all enjoy and have a wonderful season 🙂

Reznora the Yule Hobbit has been assigned the important task of helping to deliver presents this year for Yule. However, she’s never done this before! So she went on an adventure to get herself prepared for the big day.

She did not want to miss anyone on the big day, so she searched high:

She searched low (thank goodness for patient ponies who are not spooked by being ridden on ice!) 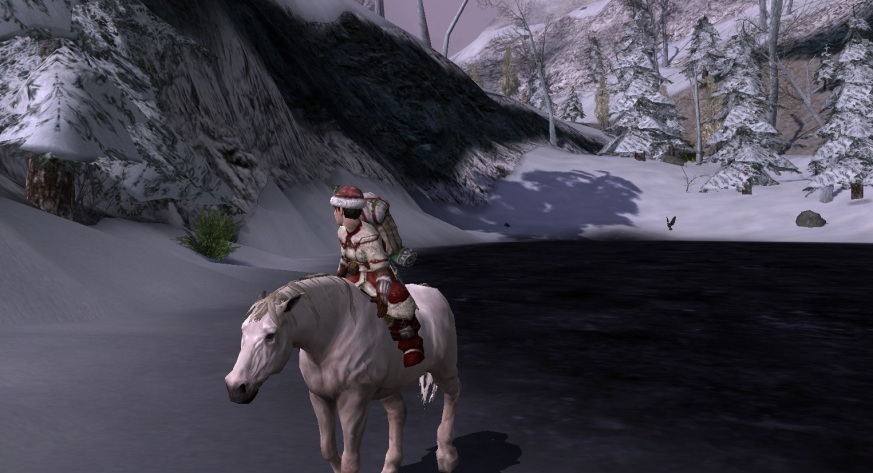 She became super excited when she made the important chimney discovery!! 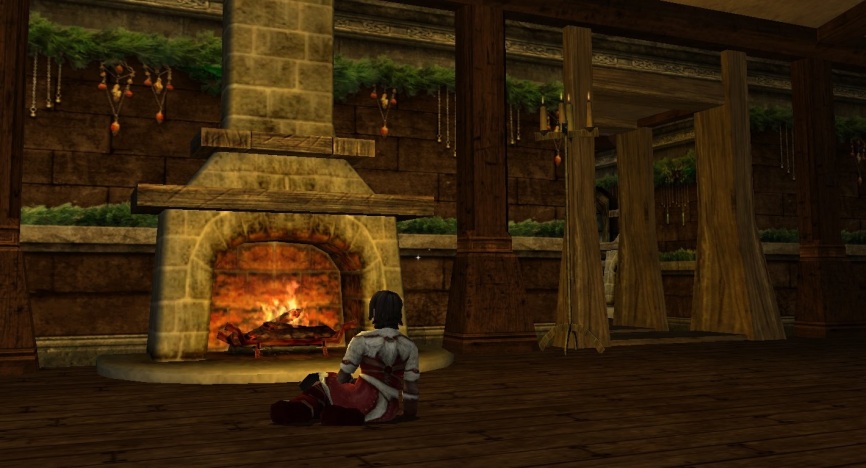 Hope you enjoyed the adventure of Reznora the Yule Hobbit!

I wish you all a safe and happy holiday season!

I wish all my fellow Americans a happy thanksgiving, and the rest of the world have a great day too!

Thank you Delphinia for helping today 😀 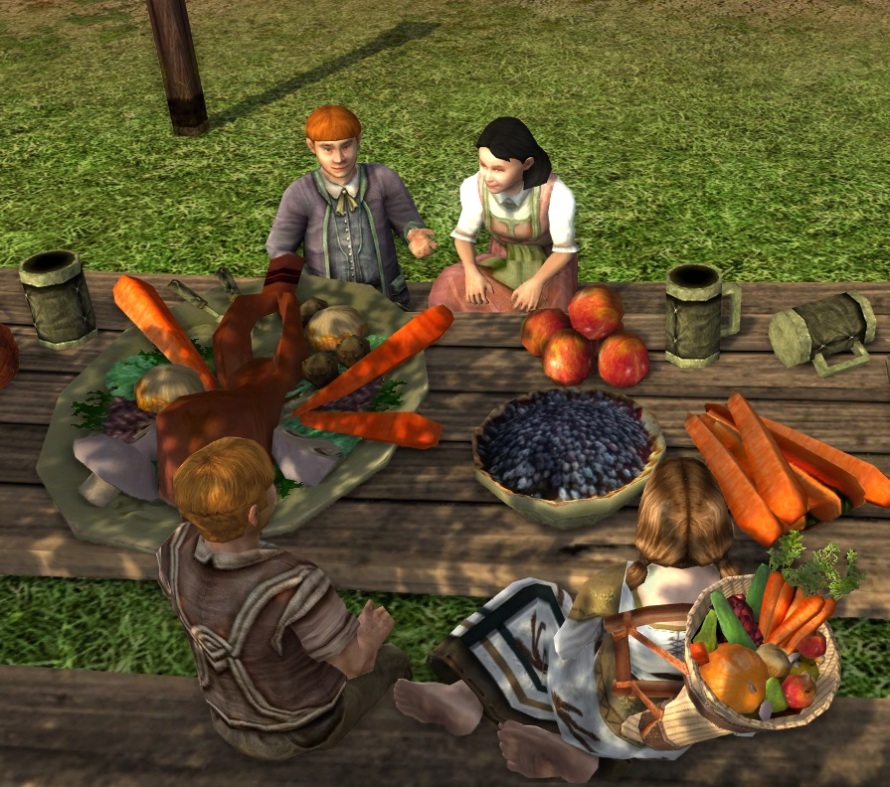 And a nice gallop through the apple orchard! 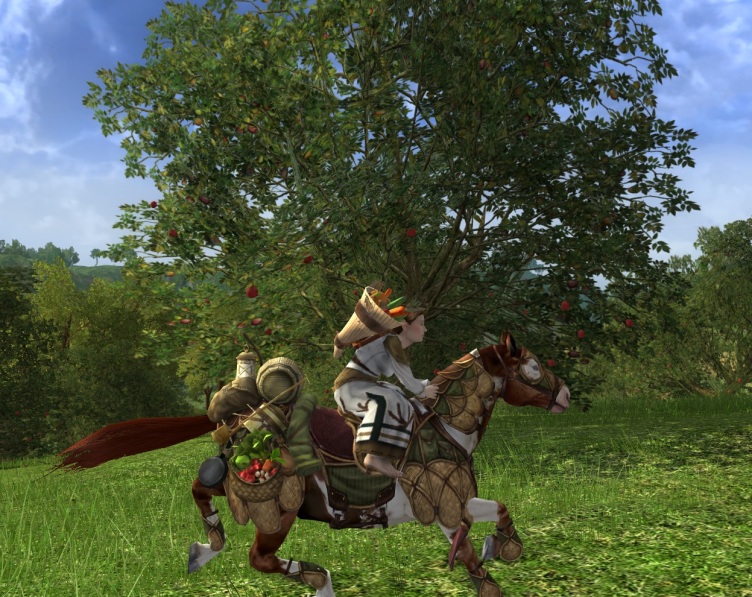 Back – Pack of the Yield

And she is riding the Steed of Michel Delving

Reznora is a young hobbit minstrel. Born in the northern parts of Ered Luin, she lived there with her parents and older sister Delphinia until a tragic accident took the lives of both her parents. She showed a strong aptitude for music at a very young age, garnering some interest from an enclave of elves living nearby, who trained her in many instruments. After the accident the sisters moved back to the Shire, Tuckborough to be precise, to be near their Took relatives. Reznora kept up her musical training, and is the reason for some of the mysterious elven sightings in the Shire as her elven mentors would periodically travel to assess her progress.

As young adult hobbitess, she is known for her hospitality and outgoing personality. Her skills at both cooking and music have made invitations to gatherings at the sisters’ home highly sought after prizes. Between the disappearance of some of her Took relatives and seeing the human champion Anmorata assisting the Shire, Reznora was inspired to join the battle. Granted this did not take much urging, with her Took blood 🙂 Her inspirational music allows her to urge her fellows onto greater efforts, and even assist in the battle. Her cooking skills also help her companions, as she can provide warm, delicious meals to fortify them before and after battles.

Reznora’s travels take her all over the world, but she always loves coming back home to the Great Smials. Her sweetheart is hobbit warden who trained with her sister, and after the war is over they plan to marry.

Her beautiful white Steed is Trentina – a sturdy and intrepid mare who matches her mistress well. 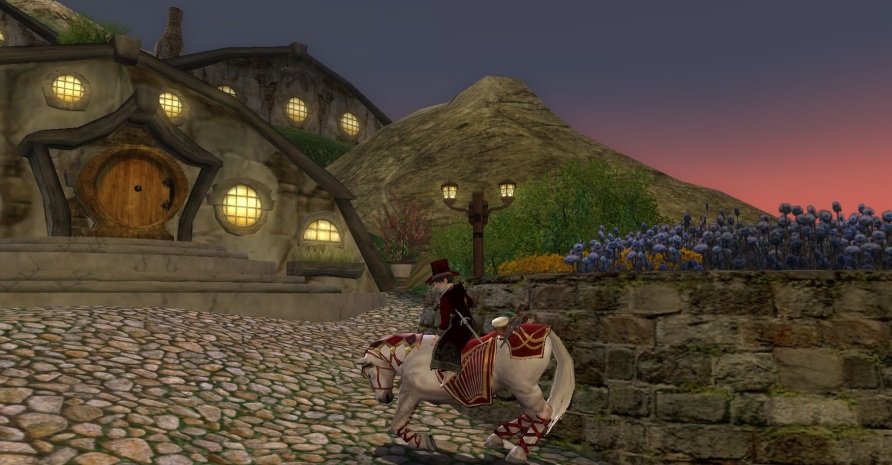